For months I have been stringing together a theory based on how to operate in the world. The threads are from people and happenings coming out of my adopted hometown of Seattle, the place I’ve called home for thirteen years this week. 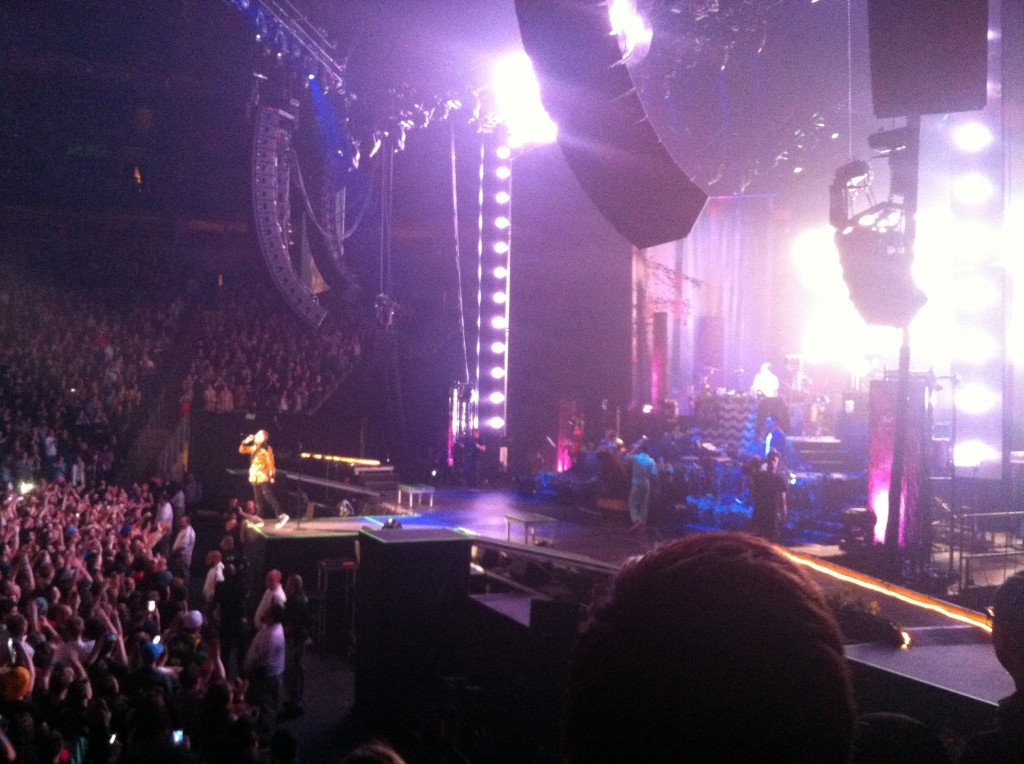 I was introduced to Macklemore’s song Thrift Shop during last year’s Super Bowl by a friend with teenage daughters as an example of what “all the kids were listening to”. My fascination with him, however, did not start until the Can’t Hold Us video came out in April 2013… and there was a frackin’ shaman at the beginning of the video. I was like… who is this guy running through a snow-covered outcropping of birch trees wearing a wolf totem!?! But it wasn’t until being gifted a ticket (still so grateful) to his first Seattle show in December (there were three sold-out shows) that the full-on gushing started.

And it boils down to him telling the story of his personal truth of addiction + recovery + self-empowerment, reverence for what and who has come before, and honoring his home. The visuals for the show, e.g. props and video, are essentially a love letter to this city, this place. Seeing his performance; their performance, really, because there is a whole crew of folks making it happen; opened and expanded my heart chakra to near outer orbit dimension.

Kshama Sawant is a socialist Seattle council member elected this past November, who made headlines two weeks ago for only taking home $40,000 after taxes of her $117,000 salary, with the balance going to a Solidarity Fund she is setting up to distribute the remaining funds to different social causes. Her platform included: Fund Human Needs, Not Corporate Greed; Environmental Sanity; Affordable Housing (a huge issue in this city); Fight Police Brutality + Racism; and Quality Public Schools. I voted for her, even though I am not a socialist, because she was the only one speaking her personal truth in that election race and she is following through on her promises.

And then two weeks ago she responded to President Obama’s State of the Union Address:

Kshama is standing fully in her seat of personal power with the vision of lifting everyone up during a time when corporations and non-profits are downsizing more senior employees in order to hire folks for less. A distressing event to witness first-hand and one that was the final push I needed out of the 9-5 world after it happened to friends and co-workers that I had known for twelve years.

Even before winning Super Bowl 48, the Seahawks Program has been on my radar since Pete Carroll took the helm and more so this past year when articles began appearing that yoga and meditation were mandatory for all players and John Moffitt quitting the NFL last November after being traded to the Broncos from Seattle. Early stories told of the difference in team culture between the Seahawks and just about every other team in the league.

And then this amazing story surfaced from Russell Wilson of what his dad used to say to him… “Why not you?” and that he posed this same question to his team at the start of this year’s season… “Why not us?”

I get chills. Tears well. These are the same reactions I have to seeing Macklemore & Ryan Lewis live and watching Kshama’s YouTube video response to the President.

“Why not you?” may be the most basic third chakra question in the Universe and the key to standing within your personal power.… for those times when you just don’t feel as though you are enough; when you cannot find your voice to speak your truth; when you find it difficult showing up in the world. These are all things that I have experienced but this little phrase is so empowering.

The culture difference is even more palpable after yesterday, where the Twelves welcomed their team home to the awe of their players. Seven hundred thousand people, in a city of 600,000, lined the streets to catch a glimpse of the Vince Lombardi Trophy glint in the sun. And at the end of the route which took two hours to complete, Marshawn Lynch carried with him a shaman’s drum and Pete Carroll spoke of his gratitude. 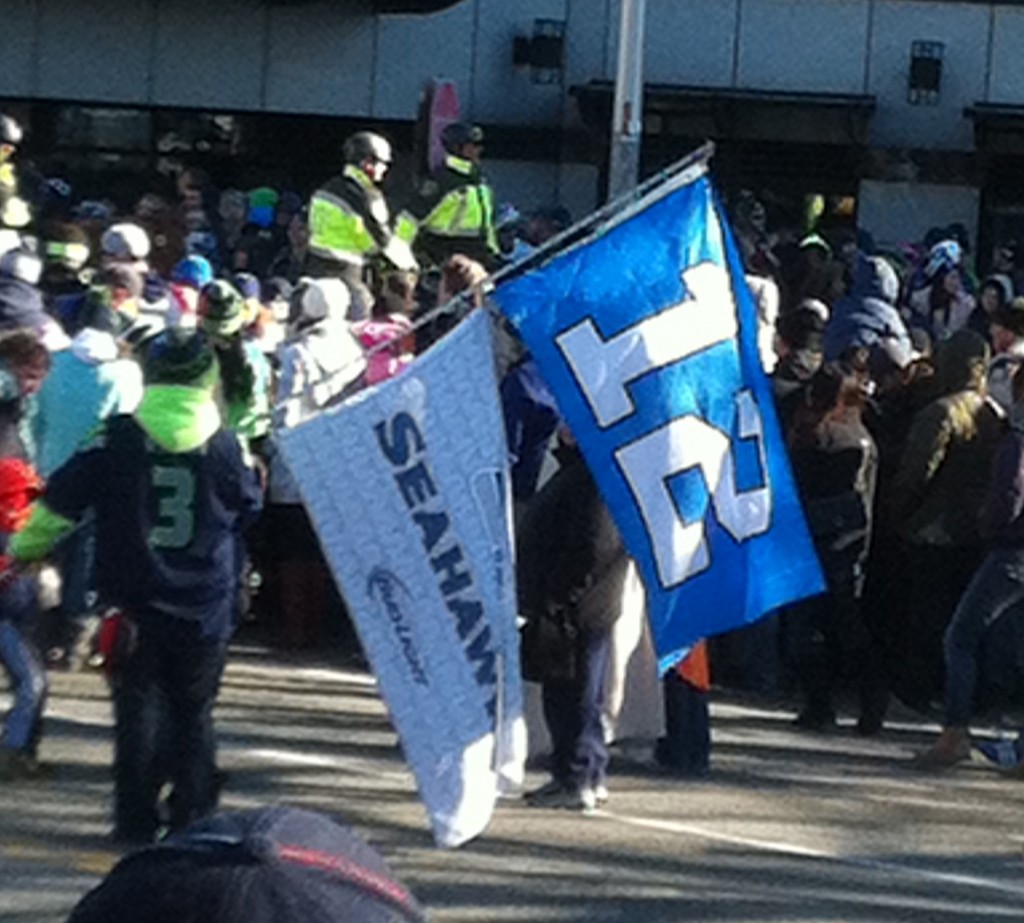 You may say… oh, it’s just football. But the reality is that a whole city, region, state had it’s heart chakra opened and expanded by a man who created a football program based on lifting people up.

Pete Carroll believes in competition to the point of religious fervor saying “Always compete… Everything You do counts”. His belief in competition comes from the latin root of the word meaning “strive together” a wholly different meaning than in, dare I say, any other form of sports in America at this point in history. Strive together is about raising every one around you so we can all do good work. I say this, specifically, based on his work in providing a way out of gang life for at-risk youth in Los Angeles and Seattle so they can take control of their lives and strive for better futures.

There is something happening here. Something outside of the status quo and most definitely out of the box. And that something is about creating a better life for ourselves and those around us by self-empowerment, each of us speaking our own personal truth with a reverence and an honor for people and place, and lifting up those around us so that they are also empowered to step into a bigger version of themselves and in turn empower others.

My heart is so full of this time, this place… and my heart chakra expands to infinity as I vocalize this theory that I have been stringing together because in a way this is the basis of my work too. And it is such a gift to step forward into this place of possibility each and every day, an honor to have found my teachers who brought me here, and truly empowering to finally speak my own personal truth once again.

In what ways can you lift yourself up and those around you to make this life, this world, a better place for all?

Research for this post is linked above with an additional source here:
The Stranger Seattle Has Stolen the Microphone by Charles Mudede – With a special shout-out of thanks to Bellen Drake, the person behind the lens for the gorgeous portrait on this site, for posting this article last night. It was the inspiring kick needed to finally commit this theory to etheric space.